What do you get when you cross a software developer that’s looking for fresh ideas for a slot theme and the passion for all types of animal slots that mobile gamblers have? You get Razortooth, the new video slot from Quickspin that is bound to satisfy those who were looking for a unique game to finally hit the casino decks. In this review of Razortooth, we tell you that things are surely going to get out of the ordinary.

About The Slot
There are leaping primeval tigers, massive potential wins and lots of entertainment to be had when playing Razortooth. We let you in on everything there is to know about the gameplay of this mobile video slot.

Don’t take this the wrong way – we absolutely love whatever’s gotten into them. It’s an innovative slot that they’ve produced and it has the potential to yield absolutely mammoth (pardon the pun) wins, but why have they strayed away from their usual fare?

Although it’s not as big as IGT’s Pacific Paradise with its 720 ways to win, Quickspin have produced their very first slot that is unlike any other slot on the market. Or in their own portfolio as a matter of fact. The leaping tiger compounds your wins

Remember Quickspin’s Big Bad Wolf with its cascading symbols? It’s just like NetEnt’s Gonzo’s Quest which invented the cascading reels. Granted, it looked gorgeous and won awards for it. But to further prove our point, do you remember the recently released Crystal Queen? We won’t hold it against you if you don’t, cause that slot was slightly disappointing…

Quickspin have produced a fair amount of games, but as you can already sense, they haven’t produced anything major. Furthermore, Quickspin games are rarely featured in prominent places at casino lobbies, which is a shame, really.

That’s until now though, because we feel like they really stepped up their game. The audiographics are gorgeous and the theme…Well, the theme is really unlike anything else out there. Prehistoric mammoths, bears, rhinos – a pretty cool bunch are joined by icy gems on the reels of Razortooth.

Quickspin have also gone and maximised their game when it comes to slot payouts. While in the past, their machines were really nice and cool to play, they rarely yielded wins that would keep you coming back for more.

Meanwhile, Razortooth busts that notion. With bets ranging from just 25p to a substantial £100, the five reels are massively rewarding. That’s mainly because of the 243 ways to win.

We know we keep going on and on about that, but just think about it. You’ve got a chance to win up to 2,000x your bet, which could even bring you to a total of £200,000 from a single wager. If you ask us, that’s even worthy to be called a jackpot!

But watch your balance as the sabre toothed tiger can also leap away with all your savings, it is a medium variance slot after all. How will you buy that new smartphone you were saving up for ages then?

With a healthy 96.61% return-to-player and some great feature potential, Razortooth has a real chance to become one of the biggest hitting Quickspin slots and stick around casino lobbies for ages. Like the immortal Starburst or Mega Fortune, or something. 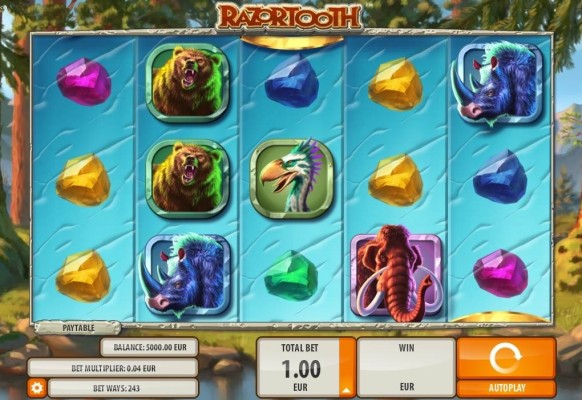 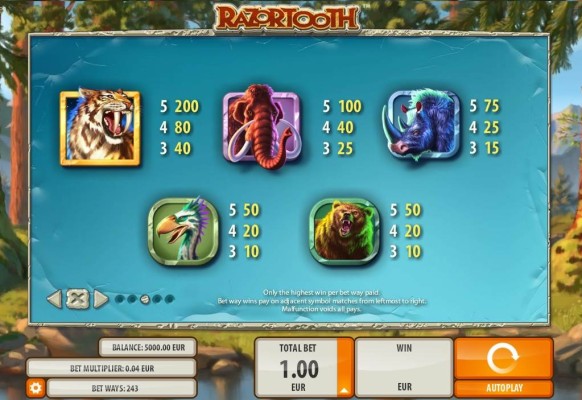 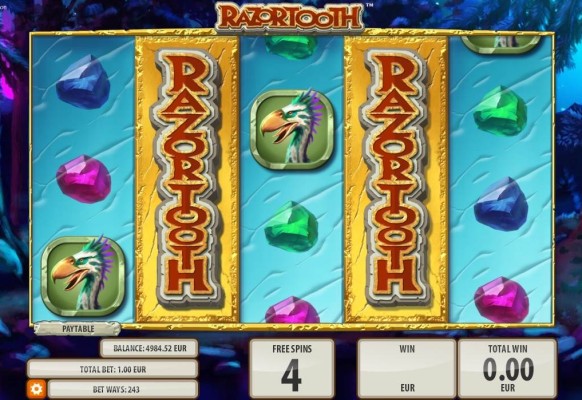 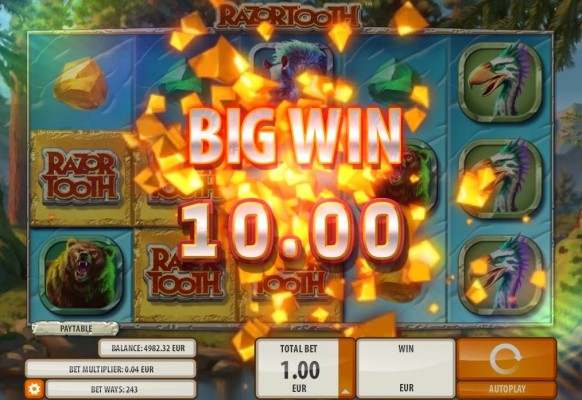 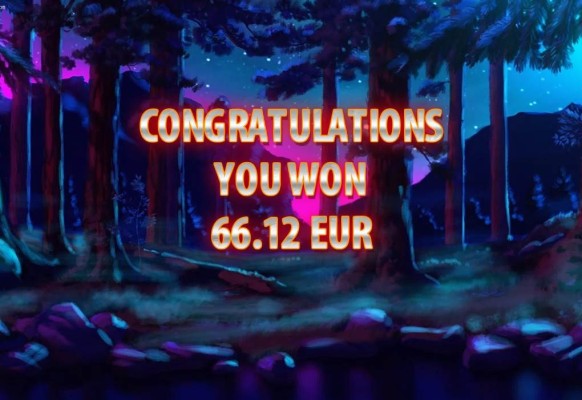 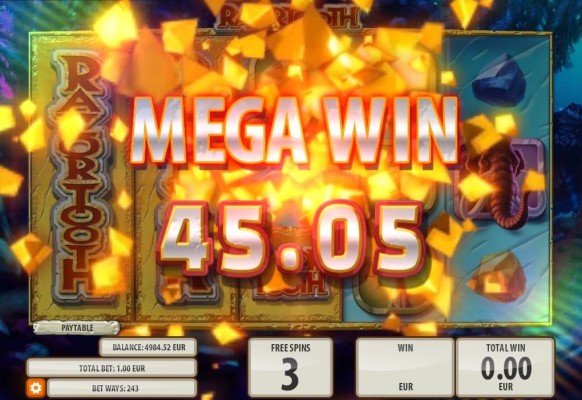 Game Features: Extra Spins And All Kinds of Wilds, Wilds, Wilds
Razortooth has a killer combination of features – extra spins, wilds, random wilds and expanding savage wilds all come together to beautifully complement the 243 ways to win.

The features are all connected

The slot might not have unique bonus games but it does feature a trinity of features that are plenty to make the slot exciting, unpredictable and profitable.

Just when you thought that your game cash balance is dangerously dwindling, and heavens know wins don’t come as often as we’d like on Razortooth, you go and hit a extra spins round.

Just three Bonus Scatter symbols are enough to trigger the game and it’s always five extra spins that you get. Not very generous, but what can you do.

During the extra spins rounds, you can also get up to two savage wilds to cover the entire reel and maximise your wins. Think of it as a stacked wild which substitutes for any other symbol; as you can imagine, the scope for weighty financial gains is big. Well, this has the potential to become really confusing to the players so we wish the random wilds feature could’ve gotten a more innovative title. Especially because it is a unique feature that would warrant itself to receive a name.

Anyhow, the wilds are just like any other slot wilds. The symbol substitutes for any other symbol, except the Bonus Scatter of course.

Meanwhile, the random wild is when a sabre toothed tiger leaps across the screen and will randomly award up to three additional Wilds. The feature is unique, unexpected and quite lucrative too. Now, tell us if a leaping tiger really couldn’t get a cooler name than ‘random wilds’…

Verdict: A Roaring Quickspin Slot
Although Quickspin are really not known for innovating in the field of gambling software, they are a decent developer nonetheless. As we can see with their newest release, they are stepping up their game in this competitive market and we think that Razortooth is set to be a cracker slot for the years to come.

It’s got a great, albeit small, handful of features which tie in nicely in with each other, it’s got good graphics and most importantly a unique theme that no other developer had snapped up in the past. For that alone, Quickspin deserves the highest praise!

But the real kicker is that this medium variance slot yields wins that take your wager and increase it by up to two thousand times. Just do the maths and let us know how your gaming session with Razortooth went!

You can already catch the game at Leo Vegas, where you can claim £1,000 in bonus cash and up to 200 extra spins spread over four of your first deposits at this mobile casino. And if Razortooth just doesn’t cut it for you, there are plenty and plenty of other slots to choose from at Leo Vegas. 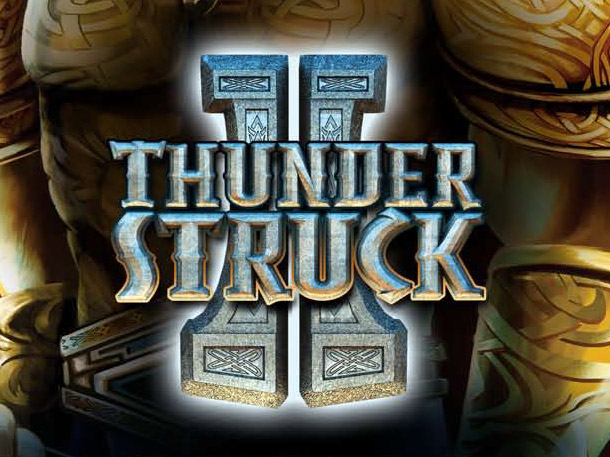 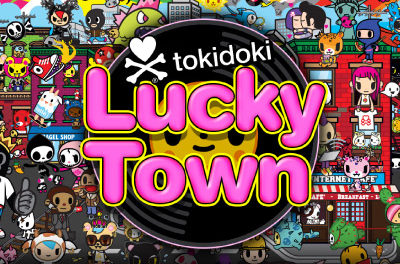