You don’t need us to tell you to play Starburst, it’s one hell of a game that you’ve come across at many casino lobbies. But what we can do is provide you with an objective Starburst slot review, tell you all about the strategies of this game and let you in on a secret of where to claim 25 extra spins to play the Starburst machine, no deposit needed!

About The Slot
It’s a paradox: Starburst has no extra spins, no real features and no progressive jackpot. That by itself would warrant the lowest one star rating and the game would’ve been long forgotten by all of those who love playing slots on their mobiles. Screw you, NetEnt, they’d say and Starburst would disappear into the abyss of the neon spangled 80s that it comes from.

But as we are sure you are aware, Starburst is featured on essentially every NetEnt casino home page, promotions are centered around this machine, and Starburst remains a firm favourite in the mobile gambling community.

Simplicity at its best

We’ve got to admit that we value the simplicity that Starburst offers and although it might have looked like an absolute loser of a game when it was first launched cause there wasn’t ‘much to it’, it’s surpassed everyone’s expectations. Piggybacking on the successes of various gem collecting and bursting games that we all got caught up on desktops and social media, Starburst is that slot that’s impossible to switch off.

NetEnt have done a splendid job in designing a mobile slot that looks and performs awesomely and without any of the gimmicky stuff. While we can all get slightly pissed off at other game developers for using the usual ‘bars and sevens’, the symbols of Starburst are beautifully drawn so we can forgive for the lack of ‘unique’ symbols.

Granted, it does give off an 80s arcade vibe, when everything had to be neon coloured, including the spandex pants worn by men (oh, 80s…). The twinkling, brightly coloured gems and stars burst, pardon the pun, off the screen, making the gameplay energetic and vibrant.

Game mechanics and the wins that await

Five reels, three symbols per reel, ten paylines… A typical video slot combination by all means, but before you get spinning these flamboyant reels, think of a gaming strategy. That’s because the slot is medium variance and although it offers a healthy ‘return on investment’ (RTP 96.1% to be precise), you need to be prepared.

The thing that makes it more volatile are the levels, which allows one to choose a bet level from one to ten, in addition to choosing their coin value (from 1p to £1) and the number of lines one wishes to play. All of these configurations mean that you can bet anywhere from 10p to £100 in total.

Whilst how much you can afford to bet per spin totally depends on you, we’d advise you to pick a strategy to play all of the paylines. Not only does this give you the greatest chance at hitting a winning symbol combination, but it also is the most fun to play too.

But it’s when you consider the fact that Starburst is a win both ways slot that things start to heat up. Way back when Starburst was released, this was a rather unusual feature, but now many slots, e.g. Starmania by NextGen (a Starburst-copycat slot), have it.

The game pays when three or more of the same symbols appear from left to right AND from right to left. This substantially increases your chances to win and hopefully makes the game more entertaining for you as well. No?

Well, would it make a difference if the maximum payout was £50,000? We thought so. The win both ways game mechanic compounds your wins, so you walk away rich, rich, rich. 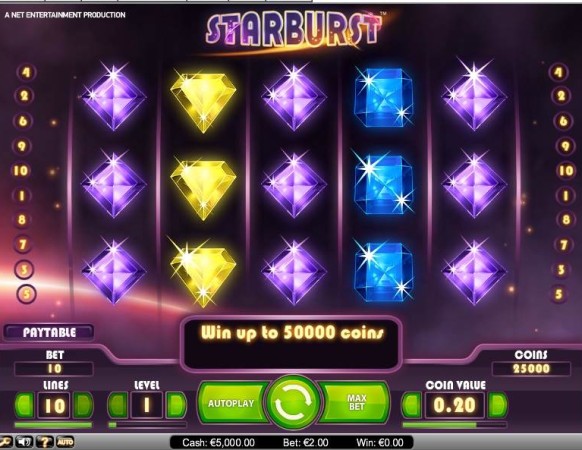 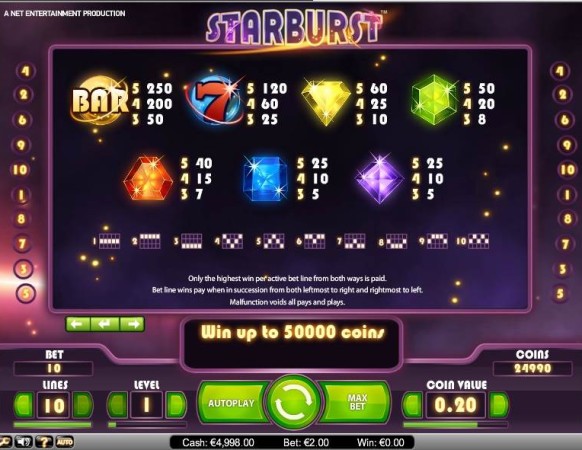 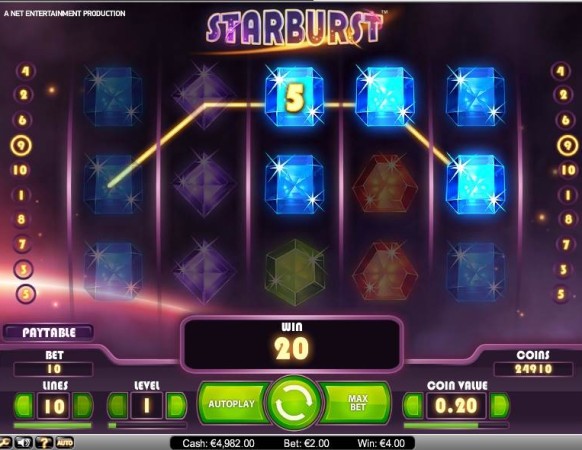 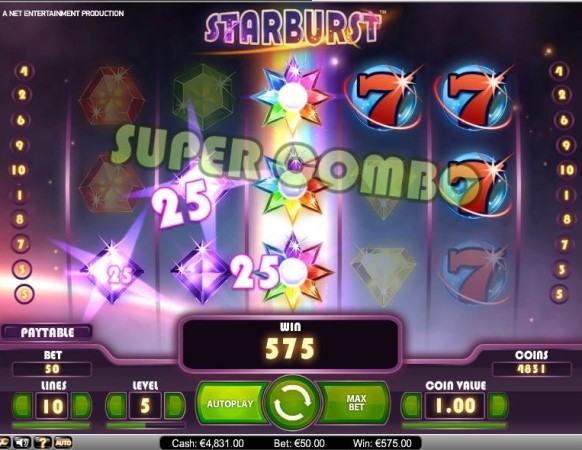 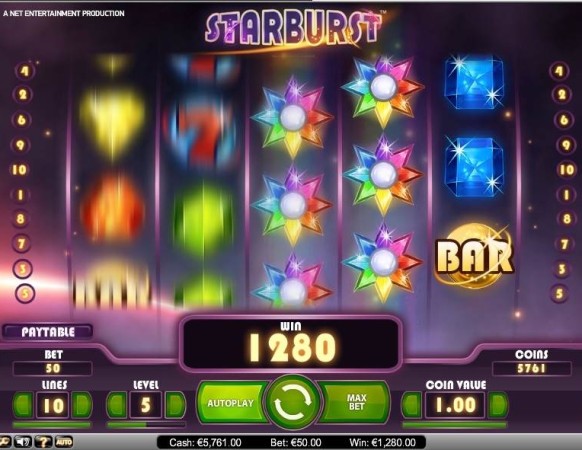 Game Features: Expanding Wilds and Re-Spins
We’re afraid this section is going to be really short. But maybe that’s a good thing. Who likes to read on and on about a game, never getting to the point? No one. And in this case, the point is that Starburst doesn’t have many unique and innovative features, which technically should make it the most boring slot in the universe and the parallel universe too. But the reality is far from it.

Expanding your chances to win with wilds and re-spins

We already touched upon a ‘feature’ which is win both ways as part of the game mechanics earlier in this Starburst review. But there are the expanding wilds and re-spins which are two of the game’s real features. Or are they?

Some might say that unless there is a extra spins round or a video feature, the wilds and re-spins don’t truly count, but it’s our review, so we will make it count! The reality of it is, the expanding wilds and the re-spins really do make a huge difference when it comes to your final game balance. Look out for these on your reels…

The Wild can appear on any or all three inner reels (2,3 and 4). The Wild will then expand (thus expanding wilds) and take up the entire reel, replacing any and all of the other symbols that were there in the first place.

But it doesn’t stop there. A re-spin is awarded whenever an expanding wild occurs, which can easily multiply your wins. What’s more is that if you get another starburst symbol during a re-spin, that expanded wild will stay in place and another re-spin will be granted.

Although we wish this could happen to infinity, it can only happen up to three times. Nonetheless, this is precisely the surge of cosmic luck that you need to get to that maximum win of £50,000!

There are plenty of conspiracy theories about Starburst as many people don’t understand just how popular a game can be without having any real features.

Undoubtedly, many Starburst slot reviews rate it as highly as us and some fault just minor details. There hasn’t yet been an official game review totally bashing Starburst, so it’s only natural that some gamblers who haven’t had any luck scoring it big on Starburst will want to vent their frustration with the slot.

Such people claim that casinos always feature the game on their lobby and always use it in promotions because they can make good money out of it, a.k.a. the people always lose on it and the perceived lack of features means that there is very little chance to win.

It’s true, the game isn’t THAT unpredictable or ‘keep you on your toes” type of fun, but it’s energising velocity and the colourful gameplay make for a great gaming session anytime, anywhere. Just look at the gorgeousness of Starburst on mobile…

By no means is this slot like Elk Studios’ Taco Brothers. If you like slots that have a storyline and video features, then perhaps Starburst, more of a relaxing gem spinner, isn’t for you.

Maybe we shouldn’t compare Starburst to other, newer slots. Remember that the game was released in 2012. Yet nearly four years later, it still kicks the ass of the vast majority of video slots that are being released right now. The retro arcade feel, the stargazing music and the win both ways feature, as well as the expanding wilds, can leave you and your bank account pretty content about life.

We guess what we’re trying to say is, Starburst is an icon in the mobile gambling world as much as Marilyn Monroe is an icon of timeless beauty and charm – not many secret tricks up it’s sleeve, but it will be spoken of for many years to come.

In the end, it’s all that matters. Five out of five stars.