After last week’s Pacific Paradise release, the new Eye of the Kraken couldn’t come soon enough. Although we love the nemo’esque tranquility of Pacific Paradise, we are always longing for something unique and innovative in the world of mobile gambling. And this is where Play’n GO steps in with a slot about the giant squid beast Kraken and underwater adventures in the deep seas somewhere around Scandinavia. As you can tell, not only is the storyline captivating, but there is also scope to win much more often with the 3×3 gameplay grid.

Visit Unibet Casino To Play Eye of the Kraken Now!

Play’n GO have strayed away from their usual design and have followed other software developers, which have been putting out grid layout games, e.g. Greedy Goblinz by Alchemy Bet. We love this turn for the more unusual and were salivating at the look of Eye of the Kraken slot for months. Now that it’s finally launched at Unibet, we are able to take the plunge and tell you all about this five-star slot.

The most striking thing about this slot is undoubtedly the game graphics that are inspired by the era of deep sea exploration of Jack Cousteau or even Jules Verne. We think that you know exactly what we are on about when we mention those two names – you get the oldschool metal diving helmets, gold plated dashboards and other various elements of the steam-punk variety.

The machine isn’t just created with an awesome underwater adventure theme, but there is a cool story line too. You must find and hunt down the Kraken, a monster of the seven seas, as he guards the treasure. You obviously want the treasure, don’t you?

Essentially, it’s a giant squid that you’re after and no, there is no calamari involved. The creature is dark and spooky, exactly what they use to scare children in Scandinavia. Play’n GO have done a splendid job at capturing that atmosphere of impending doom and the hunt for Kraken, making the machine atmospheric and likable from the get-go, for which we thank them.

How to hunt down the biggest wins

Although the game features a 3×3 grid that looks magnificent, it technically plays just like any other slot. Each symbol spins, making it as if the game had nine reels, plus there are eight paylines to take advantage of too.

Obviously, your main mission is to line up at least three identical symbols and you can do that by betting anywhere from 20p up to a massive £100 per spin. By the way, the symbol slots do spin like real reels, which is a nice touch.

Harpoon like arrows will shoot across the reels if you trigger a winning combination – moderate wins can be expected from just collecting three of the symbols, but you better look out for helmets and treasure chest. Collecting varying amounts of those will bring substantially better rewards, for example nine treasure chests get you a bonus £150.

Another way to get the maximum out of this creepy crawly slot is to get a pattern prize for getting matching symbols in all four corners (10x multiplier) or on the middle slots of every side (5x mutliplier). 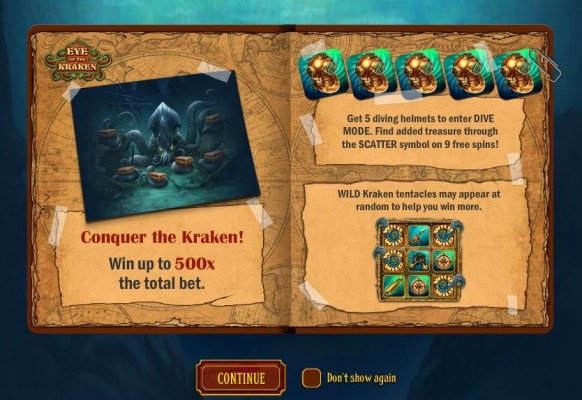 Eye of the Kraken by Play’n GO – Intro 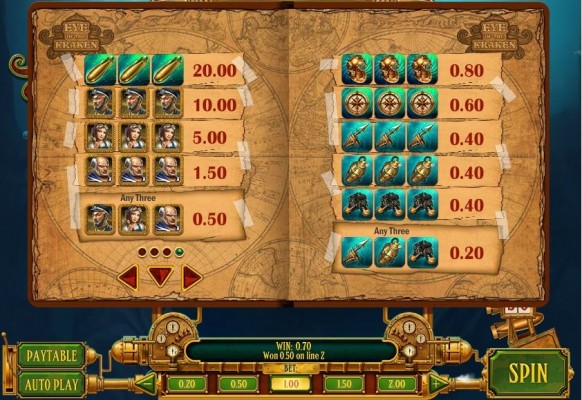 Eye of the Kraken by Play’n GO – Paytable 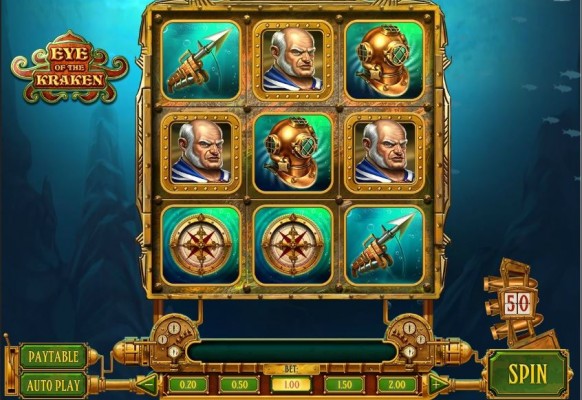 Eye of the Kraken by Play’n GO – Gameplay 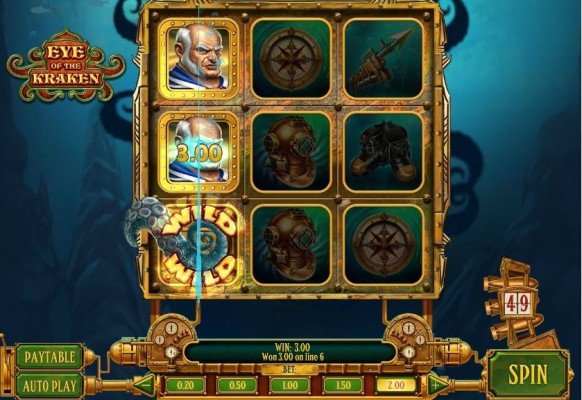 Eye of the Kraken by Play’n GO – Winning Combination 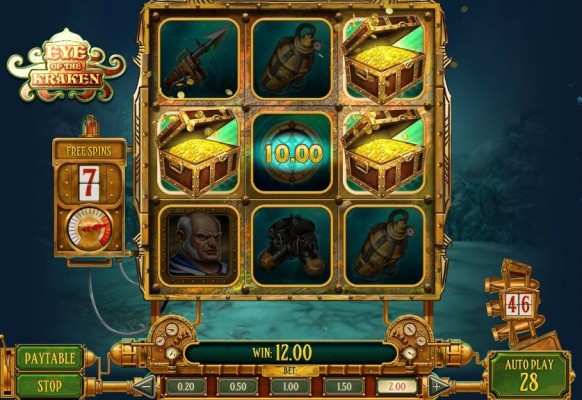 Eye of the Kraken by Play’n GO – Extra Spins 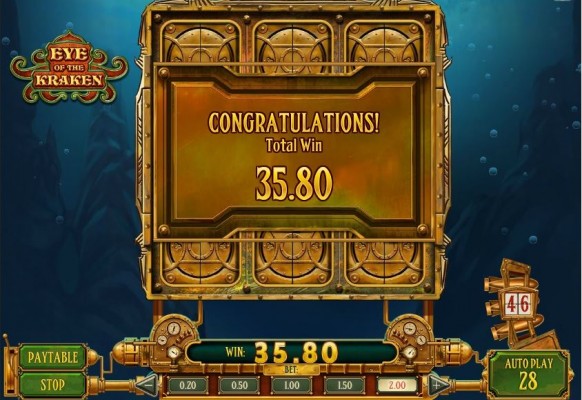 Eye of the Kraken by Play’n GO – Extra Spins Winnings 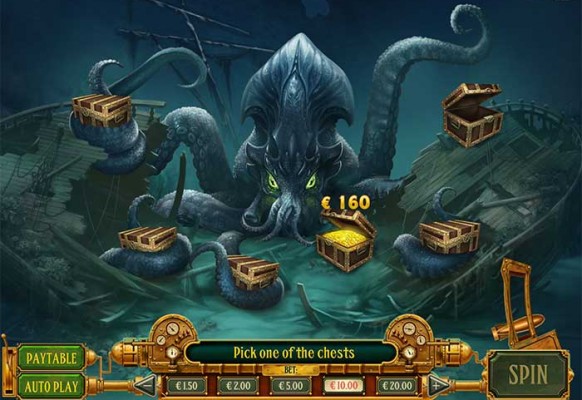 Visit Unibet Casino To Play Eye of the Kraken Now!

You might be tempted to think that this little machine has nothing going for it, because it’s based on that 3×3 grid, but in reality, it’s got more features than some of your typical slots and the features are much more exciting too.

3×3 grid that packs a punch

It’s something different and therefore appealing. But it’s not just a pretty face that’s nice to look at. Eye of the Kraken can take your wallet and fill it up too, because it’s got a decent amount of features that really pack a whole lot into it’s small screen set-up. You’ll be pleasantly surprised!

Now, how easy or hard it is to trigger the features depends on what kind of person you are: glass half empty or half full? And don’t give us that “well it depends if someone was drinking it or it was being filled” crap. It won’t help you with the Kraken features and no one likes a smartass anyway.

From what we’ve experienced, it can get tedious trying to trigger a bonus and you might feel quite lonely with just you and the looming Kraken somewhere in the background, with only the wilds there to soothe you. By the way, the wilds are Kraken tentacles that randomly appear and turn into any other symbol to maximise your winnings – the action itself is pretty cool and you simply have to check it out. But if you aren’t winning, you’ll be inching closer to battling the Kraken for it’s treasures, the Conquer the Kraken feature which can be triggered once you’ve collected 50 torpedoes on your reels, so watch the torpedo-metre on your right!

You’ll get to pick three chests with multipliers which go right up to 500x – rake your brain and pick wisely. Although it doesn’t really matter as that stuff is random anyway and everyone’s got as good a chance as any to score the 500x multiplier.

Dive into the extra spins and look Kraken in the eye

What you must be really on the look-out for are the extra spins, nine of which are awarded whenever you get five Helmet symbols on the grid. The entire grid shakes and violently moves about while you’re launched into the extra spin mode, but the rounds are spun automatically, so you can just sit back and enjoy the view of coins dropping into your virtual account. Drip, drop, drip, drop…

The extra spins are actually called Dive mode and during this game mode, Eye of the Kraken symbols can also appear on the reels, acting as wilds that can substitute for any other symbol.

And don’t forget about the chest symbols, which act as bonus cash prizes during both game mode and Dive mode too.

Play’n GO have been under the radar, but most good casinos feature this developer and seeing how unique and innovative Eye of the Kraken is, we think it’s for a good reason. The developers haven’t gone the usual ‘reskin-and-old-game-and-present-it-as-new’ route, thank God for that.

An engaging storyline, gorgeous graphics and earth-shaking sound effects that made us turn up the volume engulf the player, so that (s)he might forget this is a slot, but think of it as more of an entertaining video game.

Even if you are stuck with the relatively small three symbol wins and the features just aren’t triggering, the game is entertaining to play and you’ve always got the torpedo metre that’s going to award you extra spins in the end.

So as long as the Kraken doesn’t take hold of your (electronic) wallet and bring it down to the depths of the ocean with itself, you bet you’ve got yourself a new favourite game. Plus, Unibet Casino gives all players a free, no deposit £10, so head over there and check out this krak’ing game.

Five out of five stars.