There’s been so much anticipation and so much fanfare for Hook’s Heroes, NetEnt’s newest arrival, that we bet you heard it’s got three features. We also bet that you’ve heard of its theme that resembles a childrens’ theatre production about pirates. What you couldn’t have known is that this slot offers a return-to-player percentage that rivals that of NetEnt’s famous Starburst and that you can trigger up to 30 extra spins. Now we’re talking, eh?

About The Slot
NetEnt excels with every slot that it releases, with one new game rivaling the graphics and the features of another one. Hook’s Heroes is no exception and we love nearly everything about it.

There have been plenty of games that feature pirates, Caribbean music, ships, the sea… But no one else has dared to put children and pirates together before and that was their own loss.

There is no simple one way word to describe the theme. The best that we can do is “elementary school theatre meets Caribbean pirates” – that’s what Hook’s Heroes is all about.

And although on paper that does sound like the strangest combination for a mobile slot, the truth is that it kind of works. Scary, but good.

The backdrop of the game is cute – the sun and the clouds hanging from pieces of string, a pirate ship bobbling about in the cardboard’esue waves. It seems that this cartooney gameplay environment is rather trendy among developers now, and we quite like it.

Then, of course, there is the ‘scary plundering pirate’ part of the slot. We think that NetEnt’s done a brilliant job at crossing the line into the land of children’s nightmares, but not too far to make it distasteful.

There is something frightening about the mermaid with two black eyes and an undead look on her face, and captain Hook is a shady character too. All in all, a unique theme a captivating slot maketh, and it’s got us wanting to explore it a bit more. But of course, a theme in itself cannot make a game successful. Yet Hook’s Heroes does what few other NetEnt slots did this year (think back to the moderate disappointments that were Neon Staxx and Sparks); it’s got huge winning potential and is a medium variance slot.

Although you can bet as little as 20p when you play at level 1 with the lowest coin value, your win can be a massive £720, keeping in mind that you can win 3,600 times your bet through the many features of this game.

What’s more is that the return to player percentage of Hook’s Heroes is phenomenal. At 96.82%, it’s off by just a small smidgen from that of Starburst.

You can tell we love Starburst when it comes to gameplay and winning potential, but overall, Hook’s Heroes is not that bad of a substitute game from when we get too spaced out with all the spinning stars on Starburst. 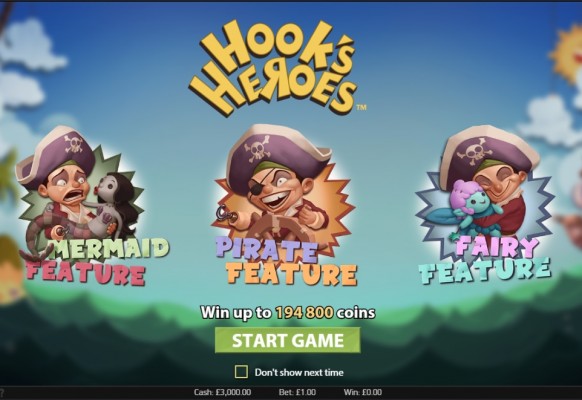 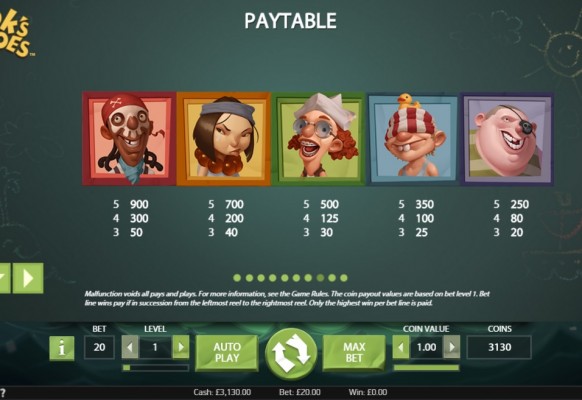 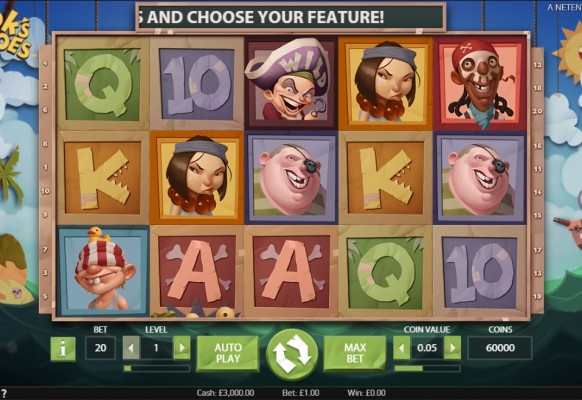 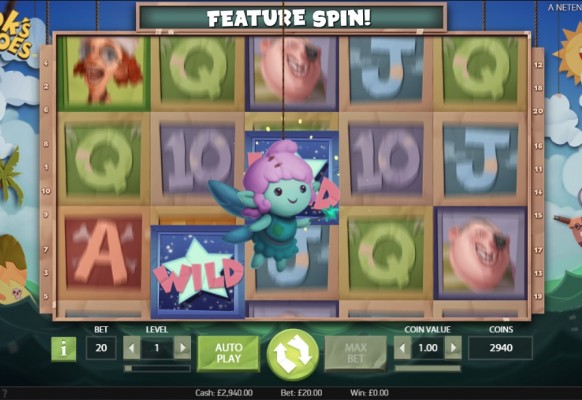 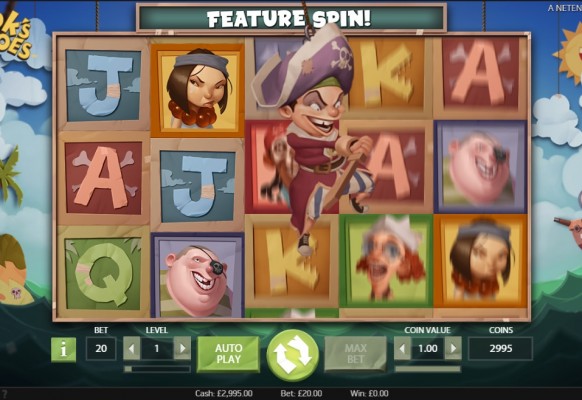 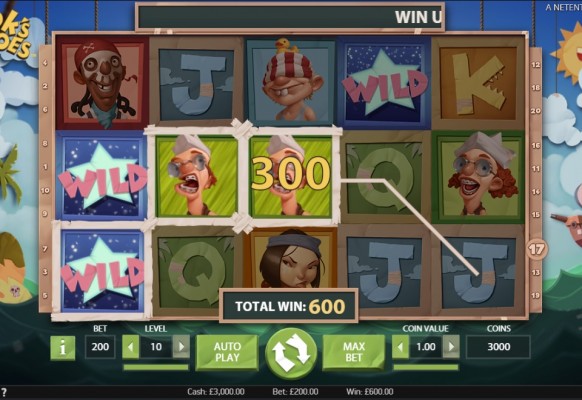 Game Features: Extra Spins + Mermaids, Pirates & Fairies
Finally, a slot that is packed to the brim with features. And we’re talking bursting at the seams kind of packed.

Where do the extra spins end?

While reviewing other slots, we might wonder when the extra spins start, but with Hook’s Heroes, we actually are wondering when they end. Not that we want them to end, of course.

For starters, the Wild symbols with captain Hook’s face, and his hook, features prominently, substitute for all other symbols except the scatters. And that’s a pity because Scatters is exactly what you want.

Scatter symbol is the cutest symbol you’ll ever see – a little cartooney child dressed up in a crocodile costume with a beaming smile. So, look out for those because massive quantities of extra spins can follow suit.

And it doesn’t matter which reels the scatters appear on. Even two scatters means that a one free spin round is in order, although the feature will be chosen for you.

As long as you got at least three of them, you get to pick which feature you want to play in during extra spins – fairy, mermaid or pirate?  Your choice shouldn’t be random though, as fairy brings seven extra spins, mermaid ten and pirate fifteen.

Furthermore, lucky players will soon discover that four scatters allow for two consecutive picks of features with the varying numbers of extra spins awarded, whilst five scatters (hey, lucky you!) give you three picks. You can pick the same feature if you get 4 or 5 scatters.

Check out this video of Hook’s Heroes or scroll down to read on to find out what each of those features is all about.

Wilds may be much more of a thing you love than multipliers. But in Hook’s Heroes, there is something for everyone.

Although it might appear that there are three separate features in this slot, the reality is a bit sadder. The Wilds and multipliers masquerade (much like the child dressed up as a crocodile for the Scatter symbol) as features, and there isn’t much more to the ‘features’ than that, really.

But let’s discuss each of them one by one.

First, the Fairy feature is something like Wilds, but a touch more exciting. When you trigger this feature randomly with 2 scatters or choose it as part of your 3,4 or 5 scatters for a extra spins round, a bubbly looking blue fairy will appear, making anywhere between two and five symbols on the reels Wild. This could potentially trigger massive wins as five overlays would mean maximum winning combinations.

Second, the Mermaid feature has the dreadful looking mermaid with the black eye show up on the reels. It’s really a multipliers round as all wins are doubled. That is unless there is one or more Wilds on the reels, which subsequently means that your wins are quadrupled. Now that’s what we call lucrative!

Third and last, the Pirate feature, which in all actuality is the most unique of the three features. The symbols that appear on the reels are what your wins are calculated based on, as opposed to them needing to be on pre-set paylines. What this means in simpler terms is that the symbols don’t have to appear on consecutive reels to bring you massive potential wins. Good stuff.

Verdict: Good Looking But…
In case you haven’t noticed, the game has been launched on Betsafe for a week now, but is being released everywhere else today. We’ve been hard at work playing Hook’s Heroes at Betsafe so that we could give you our honest opinion of the game and it’s this – good effort, but no A+ just yet.

The graphics are great and when they are accompanied by that quirky, fun Caribbean music, we’re down for it. The children’s theatre theme that’s central to the slot? We’re cool with that too.

Of course, the medium variance yields huge wins and the staggering amount you can win per single spin would already sound great, but when you add the regularly occuring features and up to 30 extra spins to the mix, that’s got us totally interested.

BUT…and there is always a but that’s worth the half a star that we had to take away from Hook’s Heroes (making it a 4.5 star rated slot in our book) is that it’s still missing that oomph, that special something that would lift it to the level of some of the other legendary mobile slots (e.g. Starburst and Gonzo’s Quest).

Yet, perhaps you’ll think that Hook’s Heroes has got every oomphy detail you need to absolutely fall in love with this mobile slot.

We will leave you to it to find out.