Review of Slingo Riches, 100 Extra Spins To Play With

Have you ever heard of Slingo? If you haven’t, we hope that you’ve found yourself a nice flat and moved out from living under a rock, because Slingo is THE hottest game this year. Says who? Well, it’s been voted upon, so it’s not just us saying it.

But even if we were, you’d have to believe us, because this hybrid game – part bingo, part slot – is all the rave right now. You can catch it at Spin Genie casino and check it out with the 100 extra spins that you receive, but first, read our review to know what this unique game is all about.

About The Slot
You get a pretty interesting game when you cross a slot and bingo, not even to mention an amazingly catchy title for it. There are the features that would technically belong in a normal slot game, but the game mechanics and the fast paced gameplay is taken from bingo. Give it a good stir, or shake if you prefer, and voila – Slingo.

We need to talk about Slingo

Honestly, we’re not trying to bring you down or anything, but if you haven’t heard about Slingo, chances are you have indeed been living under a rock.

The game itself was originally created a long long while ago, 1995 to be precise and it was a free, social game. Fast forward to 2013, and Spin Genie were brilliant enough to see the true potential of this game. After all, it would’ve taken a blind casino manager and game developer to not notice that three million people were regularly playing the game on their mobile devices.

So, they’ve taken what was a social game and turned it into a real-money spinner called Slingo Riches. Their gamble has truly paid off, because players have taken to this novelty game in great numbers. So what’s this game got going on for it?

How on earth do you play it

Our first tip – let the game carry you away. There is no clear-cut strategy to play and win on Slingo, but to enjoy the game itself and see where it takes you instead.

When you start, you’ll be faced with a 5×5 grid that will seem all too familiar to bingo players. But instead of purchasing bingo tickets, you are presented with a set grid already. After you place your bets, ranging from just 50p to £100 (erm, bet that if you can honestly afford to potentially lose it), you get 11 spins to score a Slingo.

With each spin, five numbers are rolled and shown at the bottom of the screen and the ones that match with the number(s) on your grid are checked off. Now, calling Slingo is really similar to the game of bingo – get five numbers checked off horizontally, vertically or diagonally and you’re a Slingo master.

At the end of your 11 spins, you get the option to purchase up to four extra rounds, so think long and hard what your chances of Slingo are and make an informed decision!

But we wouldn’t be raving about this game if it were just that; Slingo has slot-like features incorporated too, so you can maximise your winnings. Check out the features section below to find out how. 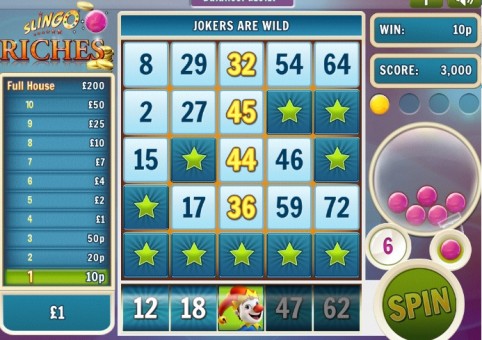 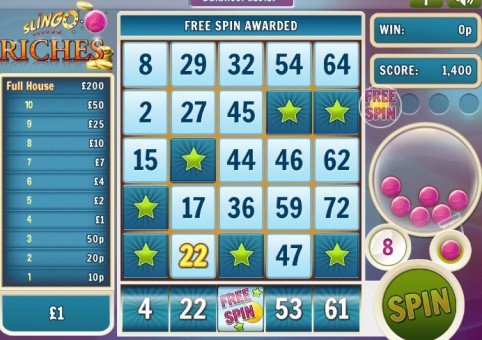 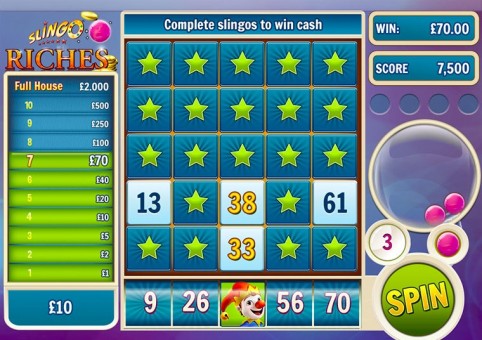 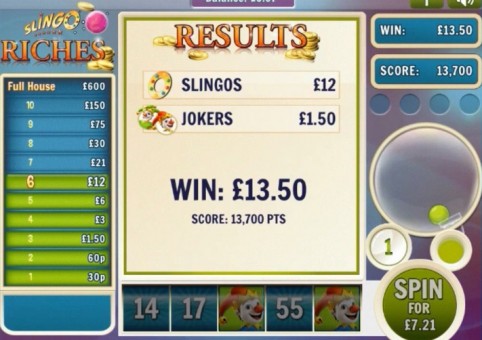 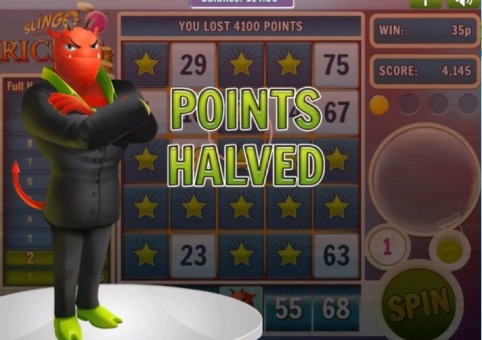 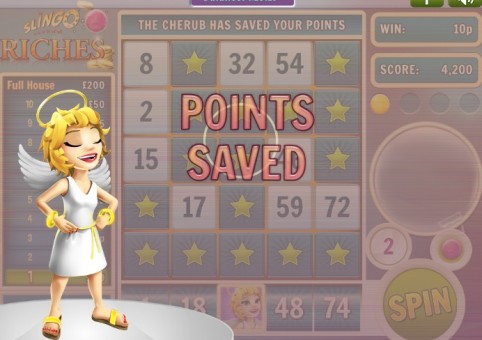 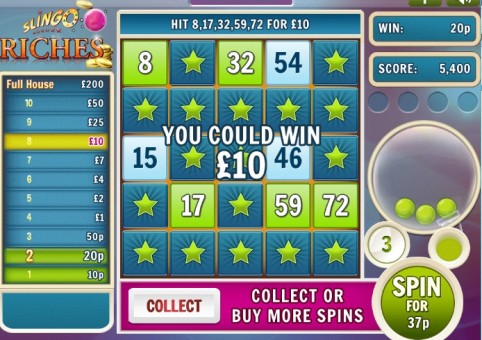 Game Features
Now onto the slot part of Slingo – it’s features. Thank God for them, because otherwise the game would just fall flat on its supposed face. Particularly, you’ll notice that good things happen in the bottom row of numbers that are spun.

First of all, there can be a Joker symbol that appears when the bottom row is spun and those, my friend, are the Wilds. Depending in which position they come up, they can be used to check off a number in that column of numbers. So if you get a Joker in the second position in the bottom row, a number in the second column of your grid can be checked off.

To give you an even bigger chance to score a Slingo, Super Jokers (Super Wilds) work even better. When you get one, you can check off any number on your grid, no matter its position. Plus, if you get three or more of the (Super) Wilds in one spin, you also get an instant cash prize. Whoop whoop!

There is also scope for another cash prize, believe it or not. If a coin symbol appears in the centre column, you walk away with some extra cash in your pocket too. Now that’s a feature we don’t see often in slots, and that’s a pity because everyone loves a simple, flat-out cash prize.

Extra Spins and Good vs Evil

But don’t lose sight of that centre column just yet, because if a Extra Spin symbol appears on it, you get a bonus spin on the house. This, in turn, gives you more and more chance to score a Slingo. Talk about a feature-centric column, eh?

It’s worth noting, that the total number of ‘extra’ rounds can only add up to four, so if you get three extra spins, you would only be able to purchase one extra round at the end. We don’t know about you, but we always wish we simply get those extra rounds as extra spins – money saved.

Don’t worry, we didn’t forget about the Devils and Cherubs feature. Instead, we kept the best for last. So, the deal with this feature is that at random points in time, the Devil can show up on your screen and half the points you’ve collected, which in turn will half your win.

But do not fret! Sometimes, a Cherub comes and saves you from the nasty devil and awards all of your points back.

Now, that will keep you on your toes and at the edge of your seat, all of which doesn’t sound all too comfortable, but it sure is exciting and adrenaline pumping. Enjoy.

Verdict: What An Awesome Game
It’s a bird, it’s a plane, it’s a shooting star! Nah, it’s Slingo, but we definitely think it is already well underway to becoming one of the most stand-out games in the mobile gambling industry. Available on any and every mobile device you could think of (alright, alright, put down that Blackberry and get yourself a real phone), it’s a unique mixed breed game.

Whilst in dogs, mixed breed usually means you got yourself a large mongrel, the combination of slot and bingo is much more pleasant. Not only is it as fast as bingo, keeping your adrenaline pumping, but it also has the features we all love and adore in slots, e.g. extra spins.

If you aren’t a member of the Spin Genie community, head right there and you’ll get 100 extra spins (no deposit necessary) to check out Slingo. We are guessing you will love this game and stick around.

But if Pocket Fruity Casino is more to your liking, they’ve got Slingo too. Your choice!