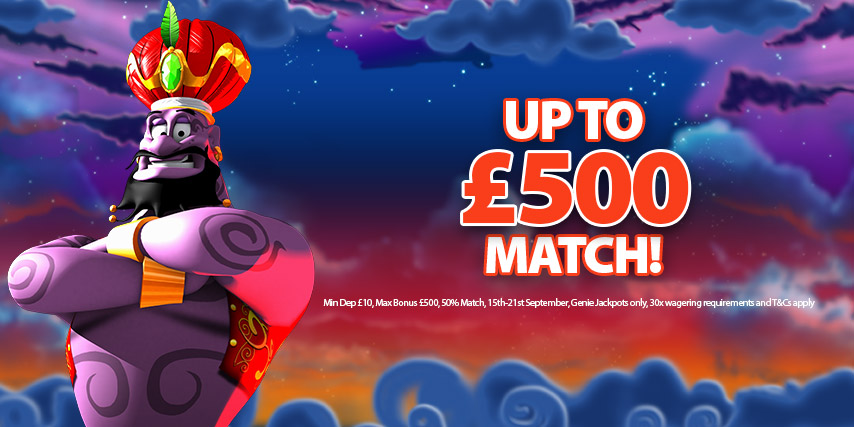 There’s a genie stirring at GoWin Casino and you’d be foolish to miss out on the magical bonuses he’s going to grant to players. Every single day between now and 21st September, each GoWin player can get up to £500 in casino bonuses as part of the Genie’s Daily Cash Match promotion. Claiming your bonus cash isn’t quite as easy as simply rubbing on the genie’s lamp, but it’s pretty close. Read on to find out more or head to GoWin now to start claiming.

Claim up to £500 Daily at GoWin Casino

The Bonus & How to Claim This promotion hinges around an incredibly generous cash match bonus, where participating players will be able to claim up to 50% on their deposits, up to a total value of £500. This means you can deposit anything between £10 and £1,000 and receive an extra 50% on top to play with. Bonuses of this magnitude don’t come around that often, so you’d be foolish if you didn’t take advantage of it while you have the chance.

In order to claim the bonus you wish for, first you’ll have to appease the genie. He’s willing to grant you your cash if you first simply wager £10 on the Genie Jackpots slots game. Once you’ve done that you’re ready to make your deposit, however you need to make sure you use the code “GENIE” when depositing, otherwise you might miss out.

As soon as your deposit has gone through, your bonus up to £500 will be credited to your account, and you’ll be free to use it on any game you wish. Don’t forget, you can go back every day until the 21st September to claim the bonus all over again.

Genie Jackpots is a new slot game at GoWin from the developers over at Ash Gaming. The high-definition video slot features five reels and 20 fixed paylines. As you can probably infer from the name, the game has a mystic Arabian theme, and your host is, of course, a genie from a lamp. As one would hope from a game steeped in magic and mystery, there’s a plethora of bonus features to make your every wish come true.

Both features ask you to choose lamps. The Mystery Win round asks you to find the genie symbol hidden under the lamp (doing so rewards you with a cash payout). In the Magic Carpet mini game, your chosen lamps guide monkeys to various magic carpets; the more correct lamps you pick, the further across the reels (and a higher multiplier) you’ll get.

The Genie Daily Cash Match bonus is available at GoWin every day from now until the 21st September.

Get a £500 Bonus Daily at GoWin Casino