New game release announcements are flying left and right this year. Now, it’s come out that Microgaming are planning an awesome release – Jurassic World mobile slot – that’s still to come this year. While we can only hope that it’ll be as good as the Jurassic Park slot that was released in 2014, we trust that Microgaming will do Universal proud and craft a mobile slot that’s full of excitement and plenty of nice, big wins, so that we can reminisce about our teen years and get enthusiastic about them dinosaurs once more.

Play Jurassic World Slot At Hippozino When It Launches

While we simply can’t wait for NetEnt to release their Jimi Hendrix and Motorhead slots later this year as part of the NetEnt Rocks 2016 trilogy that includes the Guns N Roses slot, Jurassic World by Microgaming is bound to be awesome too!

The news comes as it was announced that Microgaming have managed to come to a licencing agreement with Universal Brand Development. Jurassic World is the fourth sci-fi movie in the series that debuted 22 years ago and raked in a hefty sum of revenue when it was shown in movies last year. And when we say hefty, we mean it’s the fourth highest grossing movie of all time!

Now, Microgaming are seeking to capitalise on this ever-popular brand and create a mobile slot that will shake, rumble and roar into life. Although the next movie won’t be launched until 2018, rest assured that you will be able to play the Jurassic World mobile slot this year still.

Although a date has not been set yet, we will give you all the latest updates, sneak peaks and previews of this slot. Pinky promise! For starters, we know that it will be as good its predecessor Jurassic Park – an award-winning slot that you can play meanwhile. It features:

And just in case you were wondering if the Jurassic World slot is really worth all that wait and all that excitement that already surrounds it just two days after the announcement for its release was made, then rest assured that the answer is yes. Microgaming have been developing great mobile slots for over 20 years now and their trophy cabinet must be getting pretty full.

Just a day ago, they were awarded the Innovator of the Year award at the International Gaming Awards 2016, proving that they’ve still got what it takes to make a great game, year in and year out. Plus, Microgaming just received their Guinness World Records certificate for the Largest jackpt payout in an online slot for an incredible payout of €17,879,645.12. Resulting from a 25p spin, UK player Jon Heywood must have been equally as happy as Microgaming to be making world history.

So if you simply cannot wait for Jurassic World slot to launch this year – and we know that we can’t – why not give some of the other Microgaming slots a spin? Check out Lucky Leprechaun, Thunderstruck II or Lucky Zodiac, each offering a unique set of features.

Play Jurassic World Slot At Hippozino When It Launches 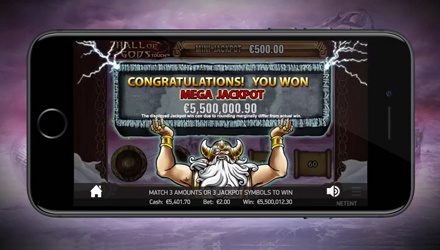