This mobile slot doesn’t need an introduction. Based on a classic story of a boy who set out to look for treasures in the lands of giants, Jack and the Beanstalk by NetEnt is our favourite slot. That’s not only because it combines just the right amount of awesome features, lots of fun and some huge wins too. There’s much more to it than meets the eye, so read our Jack and the Beanstalk mobile slot review now!

Play Jack and the Beanstalk at Spin Genie Casino With 100 Extra Spins!

About The Slot
As we said, this slot doesn’t need a long and winding set up, nor does it need for us to tell you to go and play it. Millions of mobile gambling aficionados already do so every day and casino lobbies of NetEnt casinos nearly always feature this slot. Reading this review of Jack and the Beanstalk mobile slot, you will know exactly why so many are crazy about this game.

An engaging storyline through innovative graphics

Probably all of us know the story of a little boy who climbed up the beanstalk to the Kingdom of Giants to bring back treasures. Well, NetEnt have done a brilliant job at adapting this fairy-tale and make it into the best mobile slot ever.

And we aren’t exaggerating when we say it’s the best slot – it’s got everything you’d ever want and need in a mobile slot. It’s a perfect combination of high attention to detail in terms of its design, a special fairy tale story to go by and some remarkable graphics too. The game intro is pretty cool too

We don’t even know where to begin with our praise for the animations, the graphics and the sounds of this slot. They are all fantastic, brilliant and much more. Actually, there is nothing we’d fault with the audiovisual side of things – it’s beautifully done and allows the player to focus on winning as opposed to trying to avoid glitch graphics.

Even if you play the game now, just think for a second: it was created nearly five years ago. Given the fact that there haven’t been many other slots that have exceeded Jack and the Beanstalk in the design efforts, you know that this really is a timeless 3D video slot. Well, maybe slots like Elk Studios’ Taco Brothers come close, but NetEnt’s Jack really set the bar high.

The gameplay seems organic and natural, butterflies flutter around, Jack jumps for joy and the music creates a pleasant atmosphere too. All in all, a slot that’s done an outstanding job at presenting its players with a storyline that’s relatable and a machine that’s absolutely gorgeous too.

How to play Jack and the Beanstalk (and what you can win, too)

The good news is that even the most novice player can walk away with 30x, 50x or even larger wins when playing Jack and the Beanstalk slot. It requires no prior knowledge and although the variance could be classed as medium or could even go as far as high, its range of bets will suit everyone’s betting style.

In a nutshell, Jack and the Beanstalk is a five reel and a twenty payline video slot. You can choose your bet level from 1 to 10 and your coin value from 0.01 to 0.50. Do the maths and you get to bet a minimum of 20p to a maximum of £100 per go, which is a pretty broad range, isn’t it? The paylines are fixed and pay left to right in various combinations.

Although some might say that’s it’s all about the extra spins, and indeed a heavy emphasis of the game is on them, the regular gameplay can also bring you large wins. The most important symbol on the reels is Jack. Get five of them to hit your reels and you’ll be awarded anywhere from 1,000 to 10,000 coins, depending on what your wager was.

The machine pays out a maximum of 300,000 coins, which can become a considerable amount of money, again depending on how much you play per bet. This is one of the better max payout sums for a video slot, considering that it doesn’t have a progressive jackpot. Plus, the RTP is a generous 96.3% all of which makes Jack and the Beanstalk mobile slot definitely worth your while. 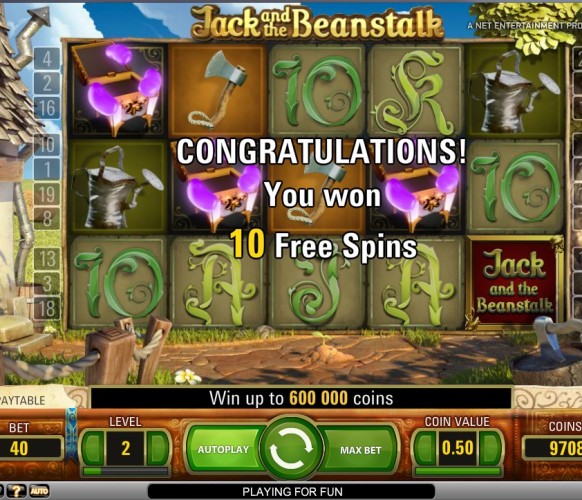 Jack and the Beanstalk Slot by NetEnt – Extra Spins 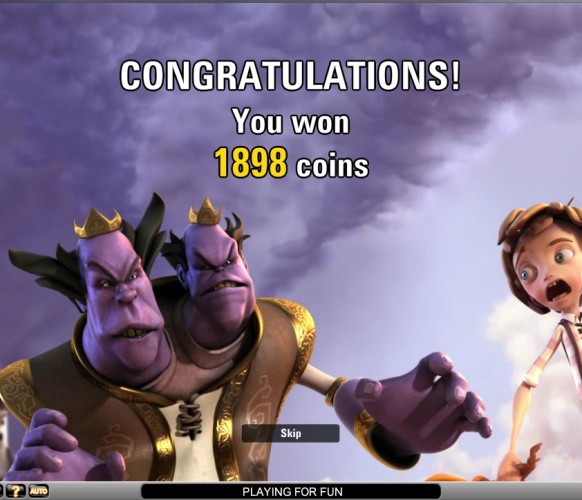 Jack and the Beanstalk Slot by NetEnt – Extra Spins Winnings 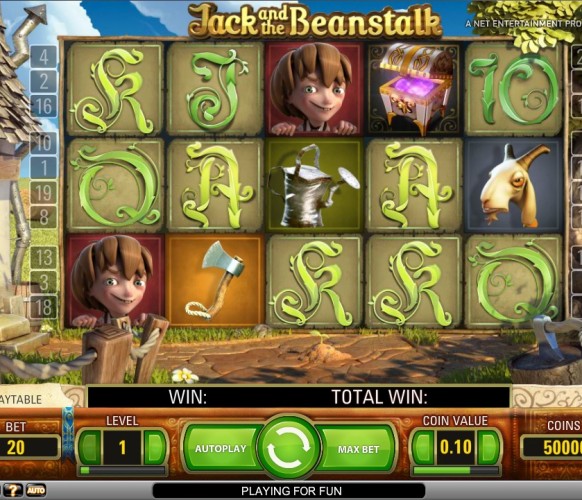 Jack and the Beanstalk Slot by NetEnt – Gameplay 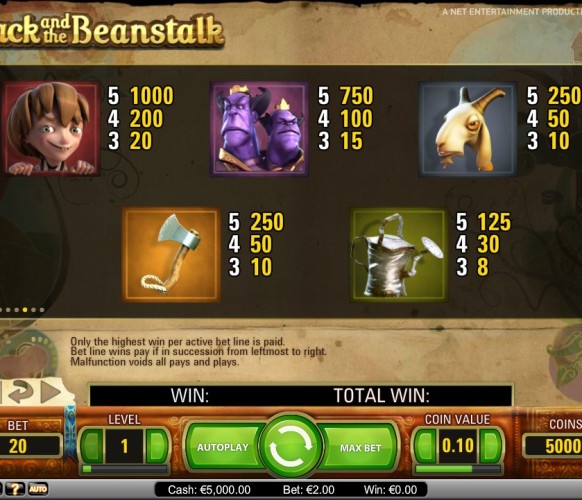 Jack and the Beanstalk Slot by NetEnt – Paytable 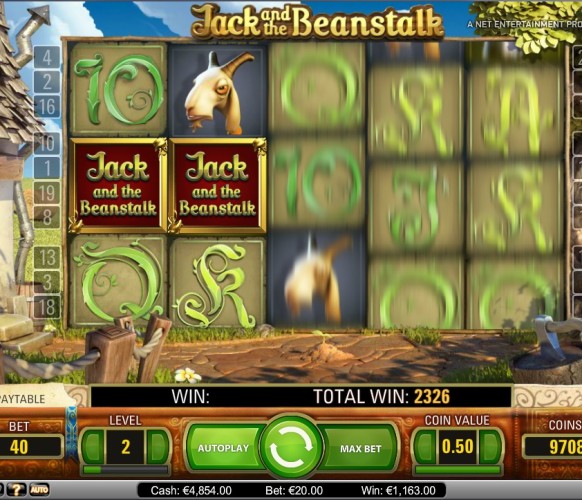 Jack and the Beanstalk Slot by NetEnt – Walking WIlds 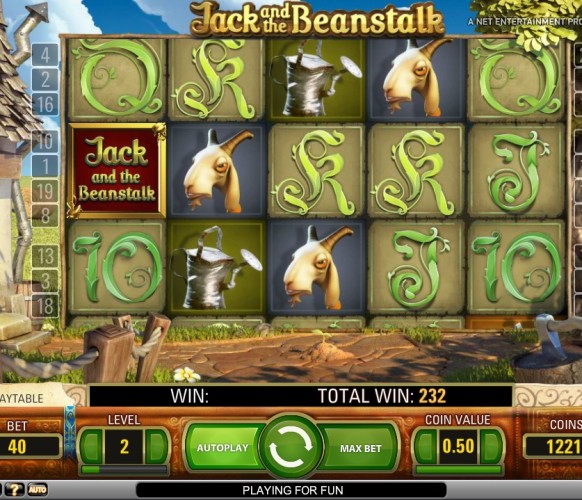 Jack and the Beanstalk Slot by NetEnt – Winning Combination

Play Jack and the Beanstalk at Spin Genie Casino With 100 Extra Spins!

Game Features: Walking and Stacking Wilds, Free (Re) Spins
NetEnt has not only done an absolutely smashing job at designing Jack and the Beanstalk mobile slot, but also at packing a great amount of features into it as well, including the Walking Wilds and a Treasure Collection too. The Walking Wild in action

Of course, you’ve got your regular Wilds which is the Jack and the Beanstalk logo. It’s used to substitute for all non-bonus symbols, and all winnings that feature the logo have a 3x multiplier applied to them.

Yet, as we said, this slot isn’t just a looker – it’s got some features that are still unrivalled until today and one of those is the Walking Wilds. When you trigger the simple Wild symbol, it stays on the reels and moves one reel to the left for a re-spin. This is called the Walking Wild.

The re-spin is absolutely free to you and you don’t need to wager a thing! This process will continue until the Wild disappears from the screen, rewarding you with re-spins over and over, and over again. How’s that for maximising winning potential! While you’d hope to get all your Wilds on the fifth reel as this would mean you get five re-spins, it usually is about two or three goes that you get for free – very decent indeed.

Get 10+ Extra Spins on Jack and the Beanstalk slot

When three or more gold treasure chest appear on your reels, this means one thing – you’re through to the Extra Spins mode with 10 extra spins granted to you! A little celebratory dance and you are ready to get spinning. Keep in mind, though, that with the walking wilds, your extra spins might extend way beyond the 10 rounds, more like 15, 20 or even 25 and more extra spins in total – awesome!

But this isn’t just a quick extra spins round because the Treasure Collection feature is also integrated into the Extra Spins mode on Jack and the Beanstalk. We see this feature elsewhere now, most recently on Holmes and the Stolen Stones with its shard and gem collection, but NetEnt’s Jack was one of the very first.

This means that while you’re playing off your extra spins, key symbols will appear on the reels. You need 9 in total to unlock all three treasures – the money bag, the golden hen and the golden harp. These treasures are essentially Stacked Wilds. So, when you unlock the money bag with three keys, a new Wild will appear on the reels as a stacked wild of two. If you get three more keys to unlock the golden hen, then this will change into a stacked wild of three. And unlocking the goose will be your top priority as it can yield proportionally large wins. Of course, that’s a good thing!

Although getting to the third level – the harp – isn’t very likely every time you trigger the extra spins, rest assured that getting the golden hen is quite a regular occurrence and this can yield wins upwards of 50 times your wager.

It’s very easy to lose track of the number of extra spins you’ll actually play during a extra spins round, because the Walking Wilds feature is also applied to the new wild symbols that you can get via the Treasure Collection feature. This will expand your winning chances to incredible heights, almost as high as the magical beanstalk itself!

Verdict: Best, Slot, Ever
The story of poor old Jack, who sold his last milking cow for a bunch of magic beans comes alive in the Jack and the Beanstalk mobile slot and we are ever so thankful NetEnt chose this story.

If we briefly compare it to some other games, there are stark differences. It’s not like Starburst; it’s very different but almost equally as good. It’s got the features that Starburst possibly lacks and it’s got the graphic designers that Cleopatra’s creators IGT could oh so work with.

First, the video slot is superb: the game graphics, the sounds and the videos that are featured in the intro and leading into the extra spins mode are jaw dropping and eye popping. We cannot think of any other slot that offers such a beautiful and well-rounded audiovisual experience.

Second, the winning potential is massive. Jack and the Beanstalk being a medium variance game, the opportunities to score a massive win are huge. Also, take into account the features that compound wins and you are looking at massive yields when the luck is on your side.

And third, the features that are bountiful and some of them truly unique. The extra spins, the walking wilds, the re-spins and the key collections – all of these and more await the players on Jack and the Beanstalk mobile slot.

In any case, it’s a mobile slot with many features, some of which aren’t just unique but greatly rewarding too. So climb up that giant beanstalk, ransack the treasures of the nasty two-headed purple giant and pursue your dreams of getting ever so rich by getting a few mega wins!

Five out of five stars. If you don’t believe us, check out the video below.