With more and more mobile gamblers logging into mobile casinos every single day, you’re definitely not alone spinning those slots. In fact, 73% of adult population have participated in one form of gambling or another just last year – that’s 35.5 million people, who are after that big prize! So who are these people? What’s their age and gender? Is a particular type of gambler more likely to play on mobile? I will provide answers to all of these questions and analyse what impact demographics have on the industry of gambling.

Unfortunately for us, the last study was conducted over five years ago and the latest demographic data that we have on the prevalence of gambling in the British society is from 2010. Luckily, we expect another report to be published very soon, although we don’t think any of the major trends will be different at all. So, here’s is a sneak peek into the world of gamblers.

How Big Is The Gambling Market To Begin With?

Before we start segmenting and comparing the gamblers by demographic factors, let’s take a quick look at the size of the industry. I’ve already mentioned that 73% of the UK population have gambled in the past year and that number is more like 51% globally. And when it comes to online and mobile gambling, the numbers of player accounts are staggering. Just in the UK jurisdiction, there are 17 million accounts registered (2014), though do keep in mind that many gamblers actually have accounts at more than just one casino. Chasing the best games, promotions and bonuses are all part of the game.

But why is it that the gambling industry has been experiencing such a boom? Well, there could be a few reasons why gambling is such a popular activity in the UK. First, advertising gambling activities became legal in 2007 and you can see casino, sportsbook and bingo adverts on the telly all the time now. Second, the ability to gamble online and on mobile have attracted the younger demographic and made them into loyal gamblers.

Men vs Women in Gambling Of course, bingo is considered as a predominantly feminine affair, but females also prefer online and mobile gambling over traditional, brick-and-mortar bookies and slot machines in dingy pubs. Also, women play for longer stretches of time, but place smaller wagers, using gambling to relax and entertain themselves as opposed to having a strategy or playing to win large sums.

To contrast that, men play more often – a mean of 115.2 days gambling spent per year when juxtaposed with 71.5 days that women spend gambling. They also surpass women in every type of gambling activity other than the aforementioned bingo and scratchcards, perhaps because they also tend to participate in more gambling activities than women generally speaking.

What Age Are Mobile Gamblers?

The British Gambling Prevalence Survey conducted in 2010 states that every single age group’s gambling levels have grown and the new report to be released this year is expected to demonstrate a similar trend. But who gambles the most? Well, the 55-64 demographic group spends the most time to gamble, on the cusp of retirement, but with some time to spare already. Flanked closely by the 35-44s and the 45-54s, this group has also seen a year on year rise from the previous census of 2007. Meanwhile, the 16-24 age group are the least likely to gamble, perhaps due to the fact that under 18s aren’t even legally allowed to do so! And then there are the 75 plussers, who don’t gamble much at all.

However, the youngest demographic group of gamblers are the most likely to use mobile phones and tablets to gamble when not at home. The 25-34 demographic group tend to play at online and mobile casinos the most out of all the gamblers – no surprise there!

Profiling A Typical Gambler of 2016

Now that we know which games females prefer and which age group are the most likely to gamble, what sort of behaviours both related and unrelated to gambling make for a typical gambler of this year? Here are all the things that gamblers are more likely to be when compared to the general public: And what sort of gambling frequencies are we talking about? The Gambling Prevalence Survey separates out four types:

There you have it, the demographics of the gambling industry all presented and packed up neatly. Now you can use all of this data and facts in trivia, pub quizzes or simply to impress your friends. Don’t mention it! 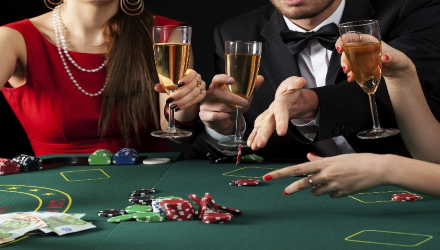 The Exclusive High Roller’s Club: What It Is And How To Get Your Foot In The Door